Michael Abels is best-known for his scores for the Oscar-winning film GET OUT, and for Jordan Peele’s US, for which Abels won the World Soundtrack Award, the Jerry Goldsmith Award, a Critics Choice nomination, an Image Award nomination, and multiple critics awards. The hip-hop influenced score for US was short-listed for the Oscar, and was even named “Score of the Decade” by online publication The Wrap.

Born in Phoenix, AZ, Abels attended the University of Southern California where he studied with James Hopkins and Robert Linn. Later on in his collegiate career, he studied West African music with Alfred Ladzekpo at the California Institute for the Arts. He currently serves as Director of Music for New Roads School in Santa Monica.

As a concert composer, Abels has received grants from the National Endowment for the Arts, Meet The Composer, and the Sphinx Organization, among others. His orchestral works have been performed by the Chicago Symphony, the Cleveland Orchestra, the Atlanta Symphony, the Philadelphia Orchestra, and many more. As guest conductor of GET OUT IN CONCERT, Abels has led orchestras like the National Symphony and the San Francisco Symphony. Several of his orchestral works have been recorded by the Chicago Sinfonietta on the Cedille label, including Delights & Dances and Global Warming. Abels is co-founder of the Composers Diversity Collective, an advocacy group to increase visibility of composers of color in film, game and streaming media. Upcoming projects include the ballet for concert band FALLING SKY for Butler University and AT WAR WITH OURSELVES for the Kronos Quartet.

Recognized worldwide as one of the most innovative and successful composers in the industry, Inon’s best-selling soundtrack for Fallout 4 has been described as “sophisticated and atmospheric” (Classic FM) and celebrated as one of the best original video game scores by the British Academy of Film and Television Arts, The PlayStation Awards, The Game Awards, Spike TV, FACT Magazine, Paste, and Classic FM. Most recently his original score for Fallout 76 was released to universal praise, described by critics as “Superbly atmospheric music” and “An amazing ambient soundtrack,” while Game Informer (the world’s #1 video game magazine) hailed the score as “The best soundtrack for the series yet.”

Inon’s latest scores include new music for Fallout 76 (Wild Appalachia, Vaults, Nuclear Winter and Wastelanders) and an original score for The Elder Scrolls: Blades, the mobile installment of the hugely-popular The Elder Scrolls video game franchise, which was premiered live at the “War Child UK Presents Bethesda Game Studios in Concert” at London’s Hammersmith Apollo. In addition to his iconic music in video games, Inon has been providing critically acclaimed scores for film and television, including the EMMY winning documentary Saber Rock as featured on CNN and the suspense thriller Reclaim for Lionsgate.

Classically trained with a flair for powerful, melodic orchestral writing, his music is also celebrated in the concert world, having had his works performed in Los Angeles, London, Cologne, Leipzig, Malmo, Seoul and Sydney. He has produced and collaborated with artists including Florence + The Machine and recently signed to Sony Music as a recording artist with his debut major label album release Into The Storm.

Chair of Film Scoring at Berklee College of Music, Alison is an award-winning composer whose scoring credits range from documentaries for PBS and the History Channel to national television ads, independent films, multimedia museum exhibits, and live theater.

Other credits include live action and animated shorts, theater (with a speciality in puppetry), and multimedia museum installations for the Smithsonian Institution and the Harvard Museum of Natural History.

Clint Bajakian is a composer, producer, and manager of video game music with credits on over 200 titles since 1991. Recipient of the 2013 Lifetime Achievement Award from the Game Audio Network Guild, Bajakian has been dedicated to the advancement of video game audio and advocacy for its professionals, innovating adaptive scoring methods in workflow, project management, team leadership, and education.

In 2012, Square Enix bestowed Bajakian an Award for Special Achievement, recognizing him as “one of driving forces in evolution of VG music.” In the following year Bajakian received the Distinguished Alumni Award from the New England Conservatory of Music. From 2004-2013, he led the music production team at Sony PlayStation, developing methodology, managing projects, and supervising soundtracks with leading orchestras throughout the world, including God of War and Uncharted franchises.

In 2014, Bajakian composed for Blizzard Entertainment’s World of Warcraft: Warlords of Draenor, which won the HMMA award for Best Video Game Soundtrack. After two years with Pyramind Studios in original music and team development, in 2015 Bajakian joined the San Francisco Conservatory of Music faculty in the Technology and Applied Composition department, and entered business as an independent composer. Bajakian holds a double Bachelor of Music degree from the New England Conservatory in Guitar Performance and Music Theory, and a Master of Music degree in Music Composition from The University of Michigan. Clint resides in the San Francisco Bay Area with his wife, Deniz, and two children, Lara and Deren.

Paolo graduated in Composition, Organ, Electronic Music, and Choral Conducting. He holds a PhD in Composition at the Accademia Santa Cecilia of Rome. He also studied Computer Science and worked for a very long time as a consultant, starting with IBM in 1996 .

As theorist and journalist he has published more than 120 articles about computer music programming, mathematics, music theory, film music, music notations, and music analysis. He has published several books for Ricordi, DeAgostini, Berben, Rugginenti, Volontè, Curci, Davinci-Edition. His book, Semiography and Semiology of Contemporary Music (ISBN: 9788876656163) can be found on Amazon.

Diego is Co-founder and Creative Director of Affinity Project, an independent video game developer based in Milan. With Affinity Project, he has developed Don-Ay, the first donation game ever made. He is Professor of Game Design at the Italian Video games Academy (AIV) in Rome, where he is the Head of the Game Design department.

From 2014 to 2017, he worked at Ubisoft on the Game Design of Ghost Recon Wildlands, also creating the AI behaviour behind game vehicles, AI Vs AI, and AI Vs Player. He works as Game Designer & Pipeline Director for Techland studios, Wroclaw, Poland, where he is responsible for several game features with particular regard to the fun factor, player engagement, and general ratings.

His education includes a degree in IT Digital Communication at the Bocconi University of Milan and a bachelor degree in Interactive Media Design at the University of Suffolk, UK, where he graduated with honor. 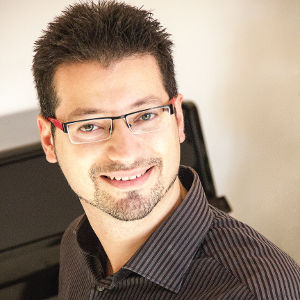 Composer and Event Manager. CEO of Merry-Go-Sound, dedicated to promoting contemporary music and digital awareness by featuring a range of events throughout the year. The company produces the highSCORE Festival and the Screen Music Program. President of the Conservatory of Pavia from 2010 to 2013. Selected by the European Commission in Brussels as Expert both in the MEDIA and in the Culture programs.

Global Head of Contents at Campus Party, the greatest technological experience of the world. He studied Computer Science at the University of Milan and Composition at the Conservatory of Milan. As a passionate Entrepreneur, he invests in marketing and technology. Recipient of the Ivano Becchi Professional Award endowed by the Banca del Monte di Lombardia Foundation and the Talent of Ideas prize by UniCredit Bank.

Keyboardist and composer for the rock band Armonite.